One of the more interesting capabilities in Solr's new statistical library is cross-correlation. But before diving into cross-correlation, let's start by describing correlation. Correlation measures the extent that two variables fluctuate together. For example if the rise of stock A typically coincides with a rise in stock B they are positively correlated. If a rise in stock A typically coincides with a fall in stock B they are negatively correlated.

We need to account for this lag time before we can perform a regression analysis.

Cross-correlation is a tool for discovering the lag time in correlation between two time series. Once we know the lag time we can account for it in our regression analysis using a technique known as lagged regression.

This blog will demonstrate cross-correlation using simple sine waves. The same approach can be used on time series waveforms generated from data stored in Solr collections.

The screenshot below shows how to generate and plot a sine wave: 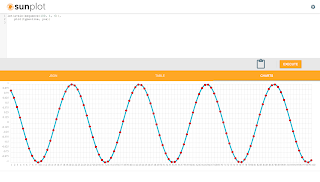 Let's break down what the expression is doing.

To demonstrate cross-correlation we'll need to plot a second sine wave and create a lag between the two waveforms.

The screenshot below shows the statistical functions for adding and plotting the second sine wave. 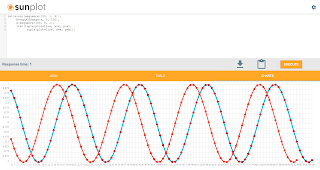 Convolution is a mathematical operation that has a wide number of uses. In the field of Digital Signal Processing (DSP) convolution is considered the most important function. Convolution is also a key function in deep learning where it's used in convolutional neural networks.

So what is convolution? Convolution takes two waveforms and produces a third waveform through a mathematical operation. The gist of the operation is to reverse one of the waveforms and slide it across the other waveform. As the waveform is slid across the other, a cross product is calculated at each position. The integral of the cross product at each position is stored in a new array which is the "convolution" of the two waveforms.

This will result in a cross-correlation operation rather then convolution.

The screenshot below shows the cross-correlation operation and it's plot. 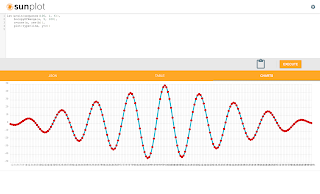 The highest peak in the cross-correlation plot is the point where the two waveforms have the highest correlation.

The screenshot below shows how the finddelay function is called. 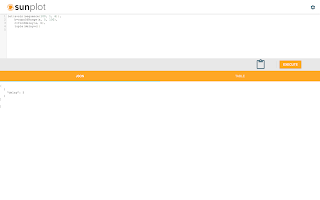 Once we know the delay between the two sine waves it's very easy to perform the lagged regression. The screenshot below shows the statistical expression and regression result. 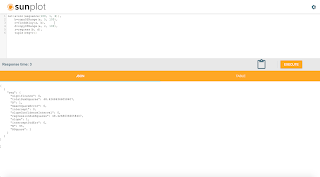 Let's quickly review the expression and interpret the regression results:


The sine waves in variables b and d are now in sync and ready to regress.

The regression result is as follows:

The RSquare value of 1 indicates that the regression equation perfectly describes the linear relationship
between the two arrays.
at August 06, 2017